I am about to sleep on night 2. Gets down to freezing at night. Very hot in the day. Like the moon? Started the trek at 1950 meters. Now at 3600 meters. Summit is at 5895 meters. A cloud ran into us today head on. Breathtaking up here.

It is 6 am here. We are driving around the mountain to the Kenyan side to start our ascent. Feeling good.

I made it to Tanzania by way of Qatar. It is 6 am, Friday, June 27th in Dar es Salaam now. The group and I are about to get on a plane to central Tanzania and then will take a bus to the base of the mountain. I don't know what connectivity I will have there, so I may not be able to post for a while. Lots of stories to tell still.

Yesterday my friends and I started hiking in the Alps next to Chamonix, France. We had already visited the Aiguille du Midi via a very fast cable car. It takes you up more vertical distance than any other cable car in the world (from 1,000 meters to 3,842 meters; which is about 3,200 feet to 12,600 feet) a 2,800 meter ascent (over 9,000 feet). This is the closest you can get to Mont Blanc without climbing up to its summit. About halfway up the cable car way, a hiking trail crosses the cable car path. That is the trail that we decided to take yesterday.

While we were ascending on our own, using our feet, we could look back and see some beautiful views of Chamonix, where we started. 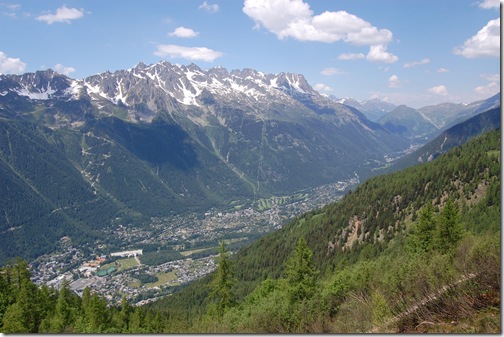 Flies and other various insects started to hang on to us as we were getting through the deep forest. Once we broke through the tree line, they decided to give up and stopped following. Some very rocky terrain ensued with large boulders and sometimes we were climbing up rocks to get to the next step. After reaching the Plan de l'Aiguille hut, at the peak of our hike, we were rewarded with some gorgeous views which included a giant glacier, Le Glacier des Boissons. 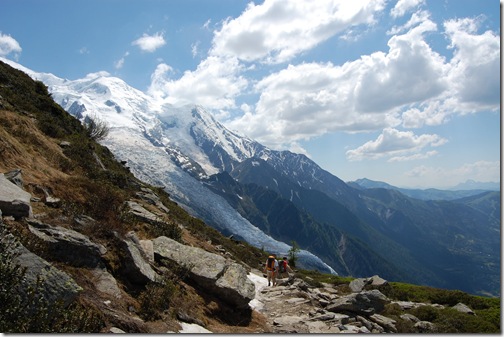 On our way down, we decided to take a detour and see the Cascade du Dard waterfall, which gave us a nice breeze.

It was the hardest hike yet, but was also the most rewarding. Now that we are back in Geneva, Switzerland, we will be getting a good night's rest and heading to Tanzania by way of Qatar tomorrow. Then the real hiking begins, I know.

I know I have been remiss not to post in so long. The long and short of it is that I have been very busy, barely able to make time for myself, but in that time I have prepared for the Kilimanjaro trip and been pretty much slammed at work.

Two days ago, I left that work to do something I have never done, and that is to go far far away from the places I knew. Not like the Bahamas where I went when I was a teenager, but really far... like France. So today I'm in France. Here's how I got here.

Some of my friends and family (you) know that I have been raising money for VSO, a charity organization based in the UK, and will be climbing Mt. Kilimanjaro in about a week as part of that involvement. Their AIDS education efforts in eastern Africa are being aided by the money that I raised.

My friends and I decided to participate in this VSO thing together, so we raised money together over the past several months, and donated a lot. We also trained for the climb quite a bit. As we were planning, we said to ourselves "Selves, wouldn't it be sweet to stop in France on the way to Tanzania and hike in the Alps?" to which we replied "Duh. Yes." and we booked our flights. So here's what the trip looks like... 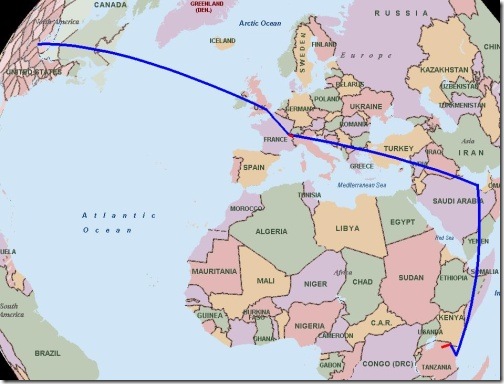 The blue lines are in the air. The red lines are on the ground. Basically it is... Chicago to London, Geneva, then Chamonix (France), hike in the Alps, return to Geneva, Geneva to Doha (Quatar), Dar es Salaam (Tanzania), then Kilimanjaro, climb up, climb down, safari... return to Dar, Doha, London, Chicago.

It is a three week trip. I am currently 2 hours into day 3 (since it is a little past 2 am right now), our first night in Chamonix, France. I will try to update more during the trip. Goodnight.