I’ve been here in India for a while and observed some interesting stuff. It’s an experience, like being on another planet really, but in a Star Trek episode. They never explained how pretty much every intelligent species in the galaxy looked human and spoke English, did they? Here are some of my initial observations. 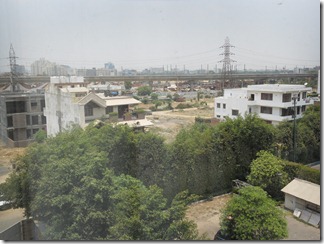 Here’s the view from my hotel in Gurgaon.

They do casual Friday here bigtime. And they’re serious about it: t-shirt and jeans. It’s a hundred degrees.

The engrish here is hilarious. There’s a guy on TV, looks to be the indian Larry King; his show is called “Question Time”… cause he asks questions… during that time.

There’s a TV show called Sutasi that I think is like American Idol, except they’re searching for the best singer/musician/band… and my favorite: most memorable lyricist. Wtf?

All the cab fares are on my “room tariff”. They say “biscuits” from the “pantry” (cookies from the kitchen). When somebody wants to tell you their “duty status” that’s their work schedule. And if I wanna “take prawns in the minus one” (which *sounds* dirty), that’s eating shrimp in the lower level restaurant.

They wouldn’t iron one of my shirts cause it had a tear in the arm and they left me this really formal note that basically said “We ain’t touchin’ this shit. It has a hole in it.” How many people have lost their jobs over that one?

The cabby told me he liked Obama cause he saw on the news that Obama said “everybody’s equal” and “Pakistan shouldn’t fire on India”. Mkay.

At the office, they have separate microwaves for vegetarian food and non-vegetarian food (which is almost always chicken), but no one follows the signs. Much like the driving, the signs are meaningless.

Dude brings me a tea with milk and it’s in this little tiny paper cup. I look at my friend and I’m like “Is this a sample?” He starts cracking up and goes “This is regular size.” Then he pays the guy like 5 rupees and I’m like “How much is that, fifty cents?” and he goes “That’s like ten cents.”

I’m at Papa Johns and it seems as if the dude at the counter doesn’t speak good English (which is pretty common for fast food dudes). So I ask my friend if he will ask this guy whether or not they have mozzarella cheese (cause Domino’s totally doesn’t and it sucks). My friend says “Sure” and slowly turns to the guy and says at a normal speed, in English! “Do you have mozzarella cheese?” It was a classic moment. The guy’s like “Yeah.” and I go “Uh huh. Sweet.”

The customer service is ridiculous. I bought a camera. No big deal. The guy knew everything about everything. He helped me with the “billing” (checkout) and then took me to this other desk where they proceed to take my camera out of the box and show me each and every part that it comes with and what it’s for. They assemble everything and show me how it works. I’m like “Uh… It’s cool. I got it.” and they basically said “No. This is how we do it. We’re giving you customer service here. Shut up and take it.” to which i said “Ok.” It was cool.

In the clubs, they love Brian Adams (a remix of “Summer of ‘69” seems to be a classic), 80s music, and Don McLean. Can you guess which Don McLean song? Yeah, they cut other songs short, but this… they play the whole goddam thing.

There aren’t pharmacies or drug stores. There are “chemists”. Like some guy is brewing up Zoloft in a pot out back.

I saw my first naked kid the other day, on the side of the road. He might have been wearing a rope.

Stray dogs, bulls, cows, buffalos, monkeys. These all roam the streets without recourse. Traffic stops for them sometimes.

Radio does a top *30* (not 40). They just had to be different. There’s a popular dance song out now that says “We Twist” over and over in the chorus. Did it take 50 years for Chubby Checker to get to India? Maybe this is a twist reprise.

Some dudes were riding camels in the street one night. You know; there’s cars, busses, trucks, TONS of motorcycles, and camels. I even saw dudes riding an elephant down the street. Anyway, the camel guys stopped on the side of the road to let their camels munch on some random trees. (Nom nom nom.) I guess for camels, any tree is a gas station. Cars have to stop at gas stations, but camels… they can stop at any tree and refuel… one of the upsides to going camel.

I leave you with some good engrish I found at a KFC. 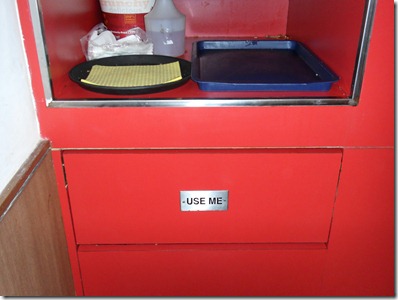 i just read this aloud to siv. rots of rors.

i appreciate your humor...any chicago observations?

Of course, what a great site and informative posts, I will add backlink - bookmark this site? Regards, Reader.