tangled up in love 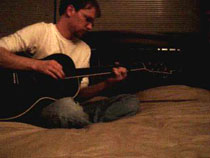 Before Keith Urban went solo, he was in a band called The Ranch. They released an album of the same name that has a great song on it named "Tangled Up In Love".

This is my attempt at singing/playing said tune.

Be aware, this is a mediocre video and arguably also that kind of performance. (All forms of snickering/fun-poking are accepted... and I'll be here all week. Be sure to tip your waitress.)