i drank the orange kool-aid

If, when I graduated from college, someone had told me that I would be a part of a global company that was challenging, exciting, had a strong passion for technology, and was incredibly good at using nothing but the best technologies to solve problems around the world, I would have said "Norfolk and Way, man." If I were told that, before I could join that company, I would be sun-burnt enough to easily stop traffic, be bitten in the face by a spider in my sleep resulting in a golf-ball sized welt on my right cheek embarrasing enough to make me question going to work, and send an email to over 100 people making a complete fool of myself... I would have said "Alright. Fair enough."

I have been in St Louis for over a year now, working toward a goal I set out to achieve last March. The goal was to get a job with a company named Avanade. I basically contracted for them from Memorial Day of 2004, when I crossed the Mississippi in my old car packed with all my personal stuff, to Memorial Day of 2005. Around September it became apparent that the duration of my stay in St Louis would be indefinite. This was due to some pretty serious delays in the delivery of the software I was (and am still) working on. Just after I came on-board there were only 19 people working on the project. Several months later the same team had grown to around 160 people. Many were brought on in haste. Some were let go. Some became frustrated and decided to leave. Some stayed on and persevered. Change was the only constant. Eventually we all gained a strong confidence in what we were doing and succeeded despite many hardships. My apartment still remains largely undecorated and bare enough to resemble a place that someone was planning on leaving. 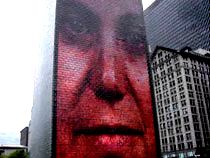 After the storm, an effort was made by the company previously mentioned to hire several contracting developers. I turned out to be one of those people. Since this company was a global entity, having offices in several major cities around the world, and by this time my recommendations were strong, I had somewhat of a choice regarding where I wanted to go. Having wanted to live in a large city for some time, I chose Chicago and visited there one weekend in May to look for a place to live.

This is a video of my trip.

Things to notice in the video: My new corporate home base is on the 37th floor of 161 N Clark, the building shown at 2:20. A cop or security guard of sorts is riding a segway at 3:31.

While I was putting this together, I decided to include some green images to combat the concrete jungle and was delighted by the results. I didn't specifically think about this when I was making the video, but the image of Grant Wood's "American Gothic" (shown at 3:18) ended up resonating with me in a couple ways.

One: The lyric being sung at the time the image is shown is "I don't have a soul to save." Those of you who know me well can put the pieces together here. Such a sentiment could really stand as a response to the organized religion now prevalent in rural America. I think of that scene as being recorded from the perspective of one who responds to this predominance by speaking to an iconic patriarch and matriarch. As you watch it, you are the resopndent. You face your audience... and as you speak you hear your own voice.

Two: The entire video is really an homage to all that is urban and perhaps, in a covert manner, adventure, being a part of something big, and the relief one feels when starting a new life. To me the image of that famous married pair being introduced between scenes of downtown serves as a flashback, a reminder of feelings that I've left behind, interrupting the euphoria brought on by newfound freedom. In that image I see a certain tension and stress between people, the people I was surrounded by in my youth who saw the world differently, those to whom I felt disconnected because of a fundamental clash of principles, those who were unlike me, who still fail to understand the feelings I describe and are dissapointed in me for having embraced them.

So I started that new job just a couple weeks ago but the scenery is the same. The people are the same. The work is the same. Almost everything remains unchanged but my own self-image. I have a feeling of accomplishment.

The goal was to be a part of something great, something that was changing the world for the better, a team of people dedicated to learning, taking on the toughest of challenges, and solving difficult problems with elegance and unmatched skill. I feel like I've met that goal and have recovered from the emotional and physical injuries that served as a gateway to that achievement. (Thank you brain. Thank you immune system.) Without a doubt, most of all, thank you to all the friends who have taught me so much... to spiders, the sun, and reply-to-all: you're the devil.

hey mike great web site. i love your playing, good song hard to play, i am so glad you are living your dream.

Mike,
You're awesome. You've come so far, I've really enjoyed reading what you have been up to! Summer classes just started up for me, and I'm designing for Microsoft this term (yeah, I know.) I'll check back often. Take Care.